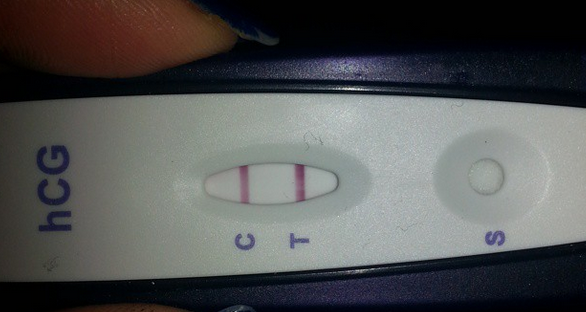 About a week and a half ago, I realized my monthly visitor was late by 5 days. Instead of panicking, I blew it off and continued my daily routine. My monthly visitor has been in my life more than half my life, so I know it and my body really well. I rationalized it as just a stress. It would come.

If you’re a girl, you are familiar with PMS symptoms such as stomach cramps and tender breasts. Then about mid-week, I weighed myself and sure enough, I gained 7 lbs. I justified this by saying , “muscle weighs more than fat.”

Friday, I couldn’t even shower without unbearable pain shooting from my upper girl bits. I was getting ready to go to my parents home to work on my brakes with my dad, which I did. My dad said, “Christine, it looks like you’ve gained weight in your face. Don’t you think Momma?”

I was horrified because if you haven’t figured it out by now, I concluded that I was pregnant. After taking 7 separate tests, all of different varieties and prices. I was positive, without fail, each time. No faint, half lines or maybes. I am pregnant with a man I don’t remember his name that I slept with to ease the pain of my best friend’s mother passing away. September 6, 2014 some guy and I made a baby, and I’m going to be a mom, and he’s going to be a father and he won’t even know.

I couldn’t be more excited.